After finding the intro of the game on YouTube, I really wanted to play this game so much! A Wild-west gunman who travels to Japan to become a Samurai and returns to save his town is a great plot, but what makes this better is how silly, over the top and how it never takes itself seriously, ever! END_OF_DOCUMENT_TOKEN_TO_BE_REPLACED

There’s one game that I would really love to play with real hardware. 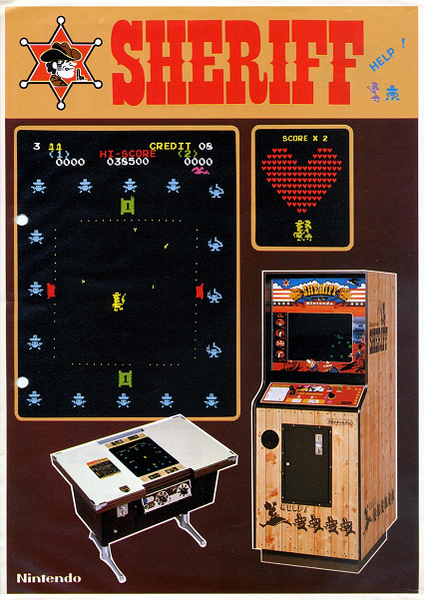 Sheriff was Nintendo’s second arcade game in Japan, the first being EVR-Race (pronounced “Ever Race”), a digital version of a mechanical horse racing game. Sheriff was Nintendo’s attempt to make a rival to Taito’s Space Invaders, clearly Space Invaders was more successful, but as a lot of people still believe that Donkey Kong was the first arcade game that Nintendo made. That’s true for the USA, DK was the first arcade game that Nintendo released in America, but EVR-Race and Sheriff were the first two arcade games released in Japan in the seventies.

So…  How do you play Sheriff? Well, that I can tell you, mainly because you can play this game on the GameBoy Advance through WarioWare as an unlockable. But the two versions are different. The GBA game is simpler as you move the Sheriff with the D-pad, and you shoot with the B button. However the Arcade version is more unique, and plays very similar to the likes of Robotron 2084, but there’s no second stick.

On the left, you have your typical either direction joystick, but on the right there’s a rotary switch where you twist to change Sheriff’s aim, and it can be pushed down like a button to shoot, allowing you to move and aim independently. 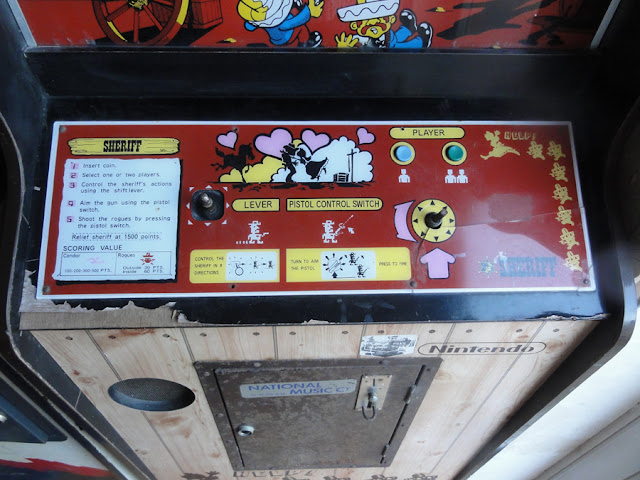 It’s a huge shame that when you find pictures on the internet of Sheriff (or the pirated version called Bambido) where people have ripped off the knobs off the joystick and rotary switch! 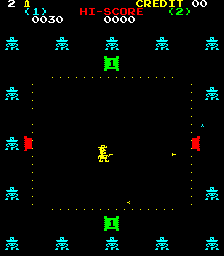 But going back to how to play Sheriff. In typical old school shooter fashion; you have to shoot your enemies, but they’re not aliens, they’re villains wearing sombreros, OK OK I know I tried to avoid using the word Mexican, but remember, you don’t have to be Mexican to wear a sombrero kids! These villains have kidnapped your fair lady, Priscilla, and you’ve been surrounded inside a bar as the sombrero cladded gangsters shoot at you through the windows. You can shoot through the windows yourself, though you (or the gangsters) can shoot down parts of the wall making it easier to shoot through. Every so often a gangster might hop inside the bar and go “mano-a-mano” against you for some point blanc shooting. One thing in this game that is very comparable to Space Invaders is that an eagle will fly over the north of the bar, if you shoot it you earn bonus points, the you score more points if you shoot it just as it enters the screen. You go to the next screen each time you clear the Sombrero Mob, and you rescue Priscilla after every 3 screens, where she doubles your total score and have a chance on earning a new life.

The cool thing I like about Sheriff is that it has a background tune to it. Sure it might not be as epic as the Space Invader march tune, but it’s still pretty entertaining.

So yeah, I would love to play this game if I ever find one. Though I have found a forum using Google of a German guy who found a Sheriff arcade machine…