OK, the PS4/Orbis is going to be announced this Wednesday. Either you’re excited or not, but there have been a few new titbits about the system before the announcement… 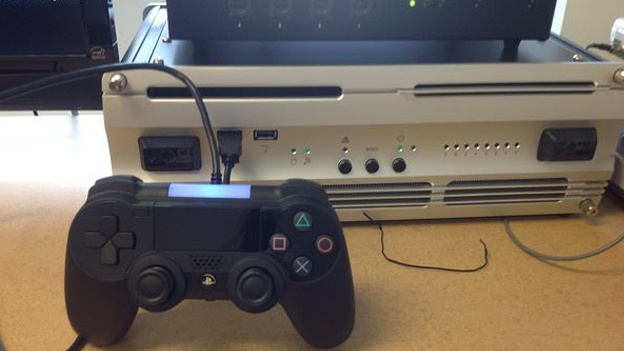 A few days a go, this image emerged on the internet. It shows a prototype version of the PlayStation 4 controller with a developer system. It was then confirmed later on that day that this is official developer hardware, and that the controller shown is simply a wired version of what’s to come. 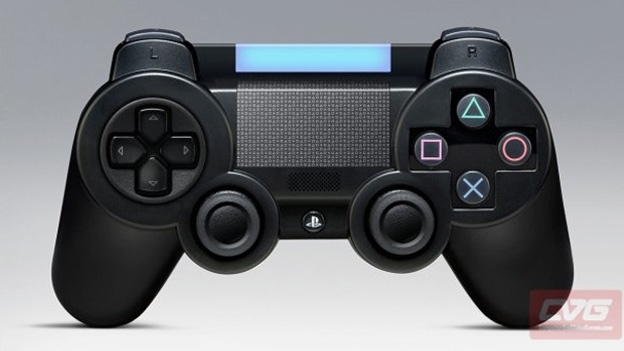 Based on the image above, Computer and Video games made up this artist impression of what we might be seeing in the final version of the controller. Interestingly, the Start and Select buttons from the previous PlayStation Dual Shock controllers have been removed to make way for a track pad similar to that of the back of the PlayStation Vita, and the centre of the Ouya controller. The controller is believed to feature a built in microphone and speaker, similar to what the Wii-U GamePad has. But the most interesting thing about the controller is it’s blue light on the top of it. It’s believed that the new PlayStation 4 controller will share similar functions to the PlayStation Move and can light up in different colours to represent different players, but is also thought to be similar to what’s found on some new Android phones that use an RGB LED to light up different notifications such as friend requests, online game invites and emails even when the system is turned off.
It’s all speculation at the moment just from a single image, but it would be interesting to see what’s in store for the PS4/Orbis controller.

It was announced today that the PlayStation 4 will not have any “real” backward compatibility, however Sony has a joint-venture with Gaikai to stream PlayStation 1, 2 and 3 games to the PlayStation 4 via an internet connection to a central server, just like OnLive. The only issue I have with this is that well people are going to have to re-buy their games again, either that or pay a subscription fee to play games that they already own. Now Streaming the video and audio of a previous catalogue of games make sense from a hardware point of view as you don’t have to add old hardware to a new piece of hardware that might slow it down. But it still sucks that we might have to buy games again just to play them on new hardware. At this point there’s almost no point in selling off our old hardware as we might not be able to play our beloved games of this generation onto the next.

Recently in Japan, there’s been a little bit of speculation over a piece of old cultural superstition about the name “PlayStation 4” and how it might have a totally different name to avoid the number “4”. For those who might not understand this terribly well, one to four in Japanese goes like this…
Looks fine right? Well there’s a problem with the name of number four, Shin, as it also mean death in Japanese. Over the course of Japanese history, people in Japan avoid using the the real word “Shin” and replace it with “excepted slang” for the number four, which are “Shi” and “Yol”. In some cases people in Japan even use the English “four” to prevent using “Shin” to say death. Think of it as an Eastern version of our superstition towards the number thirteen.
This is one of the reason why the Japanese are more supportive towards the Orbis name rather than PlayStation 4. OK it’s not quite PlayStation Shin, or even PlayStation Shi or PlayStation Yol; but the Japanese in general just have a silly little fear about their number four. But what makes the whole “Shin” word silly is that it has many other meanings rather than just the number four and death, it also mean “Body”, “Heart” and “Soul”, so looking at it from a western stand point, the whole “Shin” being a scary word about death isn’t really a huge issue at all. To be honest it would make sense to call the system PlayStation 4, since every system before has been named “PlayStation” with a number after it. More on this can be read on Kotaku.