Good Old Games are doing another limited game promotion. This time there’s a classic game up against a modern game. There are limited numbers of each game to sell, and when one get gets sold out, it get replaced with a new game. So keep you eyes out on awesome deals.

I got myself Monster Bash for 99p and The Vanishing of Ethan Carter for £5.99. What games will you get? Tell me in the comments below. Today on The Retro Magazine website, the Blue Sky Rangers, Realtime Associates and Retro Magazine will be working together to get the Intellivision Gen2 games onto PC and Mac. Intellivision Gen2 began as a set of games playable from the PlayStation 3 Home online service. It eventually appeared on the PlayStation Vita as downloadable games before making it’s way onto iOS and Android. These games were, AstroSmash, Shark!Shark! and NightTrap, they were remade and designed with new school graphics whilst maintaining the original gameplay mechanics of their original games on the Intellivision. It was announced that Utopia, Sea Battle, Deadly Discs, and Snafu might appear too on the PC version of Intellivision Gen2.

You can read more about this on the Retro Managazine Web site.

You can join the Intellivision Gen2 Facebook page right here. Today, Firaxis announced a new upcoming game that will be based on their current game Civilization Beyond Earth, called Sid Meier’s Starships.

This is the only video shown, it doesn’t really show much, but I have a hunch on what it might be like… END_OF_DOCUMENT_TOKEN_TO_BE_REPLACED END_OF_DOCUMENT_TOKEN_TO_BE_REPLACED

Being the silly unaware fool that I am, I missed out on reporting about this the very moment it started. Because of this I was very close to missing out on a great offer to get DreamFall: The Longest Journey for a whopping 80% off!

GOG will be changing their offers every 40 minutes, so be sure to keep an eye out and snag an offer for some awesome DRM free games! The first Kickstarter that I supported was Revolution’s Broken Sword 5: The Serpent’s Curse. With much waiting and patience it’s finally coming out on the 4th of December! But there’s a little catch, due to time restrictions and workload, Revolution is going to release The Serpent’s Curse in two parts. The first as I said, on the 4th of December, and the second part some time in January. END_OF_DOCUMENT_TOKEN_TO_BE_REPLACED

Oh yeah! This is happening!

END_OF_DOCUMENT_TOKEN_TO_BE_REPLACED

I’ve been really bad trying to keep up with my blog. However I’ve come up with an idea for an article where I talk about what Retro game, and what new school game that I’ve been recently playing. So here it goes…!

I’m going to make this a Space Age SOSN, so I’m going to start with Ron Hubbard’s Crazy Comets! END_OF_DOCUMENT_TOKEN_TO_BE_REPLACED

So heck yes! Shahid Ahmad, the creator of the classic Commodore 64 isometric maze game Chimera is getting a 3D make over! Check out these great pictures!

END_OF_DOCUMENT_TOKEN_TO_BE_REPLACED

I really need to keep up with my blog writing! I haven’t written anything is ages! So let me tell you about one game I got into after purchasing it from a Steam Daily Deal. 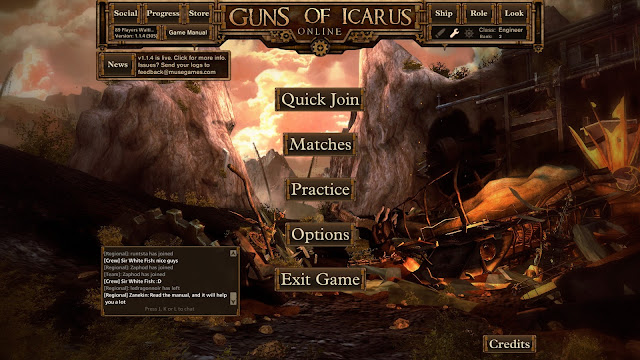 Guns of Icarus Online is the Player Vs Player online game sequel to Guns of Icarus, a cooperative game about manning an airship in a fantasy steam punk world. This on the other hand is still cooperative, but as I mentioned it’s the PvP version, meaning you’re up against other teams of people in airships rather than bots like in the first game. 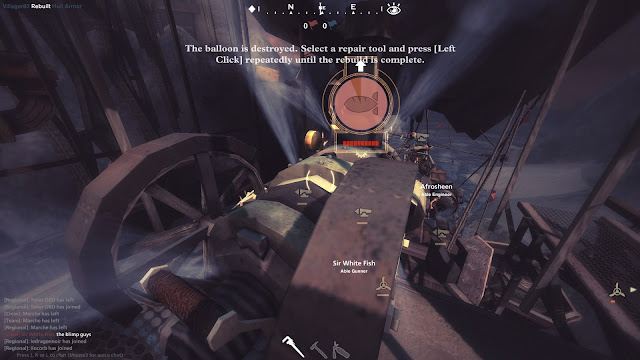 Before you go out on your epic quests of glory in the high skies, you select one of three classes, Gunner, Engineer, and Pilot. The Gunner is quite obvious to describe, he or she takes hold of one of the many guns and cannons that are on the ship to gun down the enemy team’s ships. The Engineer frantically runs around fixing parts of the ship as it gets gunned down, and the Pilot steers the ship, positioning it right to avoid enemy fire and shot back. I picked the Engineer class, mainly because it gets me moving a lot, and I can buff any part of the ship to give it an edge in the skies. Shown above, here’s me fixing the pumps and the balloon as it got shot down pretty bad. You have to use what’s called a “Rebuilding Tool” that allows you to rebuild any part of the ship that reaches zero hit points, then you have to use a “Repair Tool” afterwards to raise it’s hit points. There are three tools the Engineer can use, there’s the rubber mallet, the adjustable wrench and the spanner. They can all be used for rebuilding and repairing, however they have different qualities. The Rubber mallet can repair at 200 hit points per cycle, but has the slowest rebuild time, the spanner only has a 30 hit point repair per cycle, but has the quickest rebuild time. The adjustable wrench on the other hand delivers about 110 hit points per cycle, and has a rebuild time somewhere between the two other tools, making it a good all rounder for fixing parts of the ship, no need to carry two other tools. Well, you need to bring 3 tools into each game, so I bring the wrench, a buffing hammer and a fire extinguisher. The buffing hammer is vital to give each part of the ship that extra boost, applying is to rotor can make the ship move faster, apply it to the guns and they can cause more damage, and applying it to the engine and hull gives the overall ship’s hit points an extra 15 percent more than it original did. The fire extinguisher is important to take out fires, as fires will quickly destroy the ship, it’s vital to get fires out quick to prevent prolong damage tot he hull. 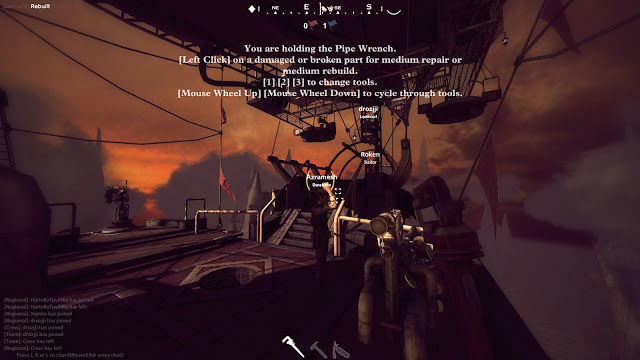 I have yet to play any of the other classes yet, though there’s other to prevent you from grabbing the guns or the helm. Though you’re a little out of luck as Engineers can’t use more than 2 different kinds of ammunition, or use more than one of the special piloting items. Each class basically handles more items based on their skills. So more tools for the Engineer, more ammunition for the gunner, and more items such of telescopes and rocket fuel for the pilot. 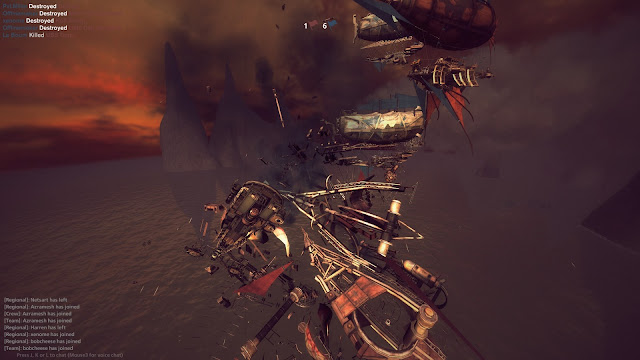 So far I’m really liking the game, and trying to level up my Engineering skills. However I have had a few failures that involved me being in teams that like to do their own thing, or not quite understand what to do. I mean fair enough to noobs and what not, but when you have a level 4 pilot, you’d expect he can actual pilot the airship well rather than crash it into other ships or cliffs. Plus I’ve had a few arguments with other engineers on my team who have their priorities a bit skew-if, where they’ll be trying to fix the rotors that have half their hit points left, but the hull and engine is on fire and I can see ourselves burn and fall to our deaths. I could never see myself getting angry with strangers on an online game like this, but when I have fools around me it does tick me off, and I begin swearing especially when my team isn’t quite on track. 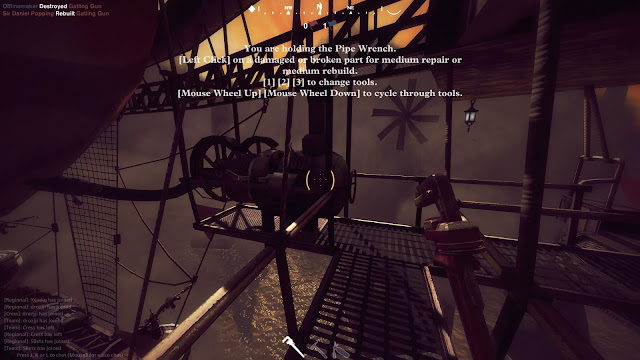 Guns of Icarus Online is a pretty fun online multiplayer game. It feels like an FPS shooter when it isn’t, and has a very big emphasis on team work. You can’t just have a team of gunners, who would pilot the ship and who would maintain it? It’s pretty balanced in that respect and that’s what I like about it. The Engineer might sound like a boring job in this kind of game, but the Engineer is vital to the ship’s survival, so that’s why I picked it. However there is a slight issue that I have with it, and that’s it’s price. At a price tag for £14.99, I think it’s a little steep considering how little is in the game. It would be nice to maybe see a few more classes and maybe a boat load (Hah! Pun!) of different maps. But in my opinion, £14.99 is a little too much considering what this game provides content wise, I mean heck there’s micro-transactions for customising the look of your character! It’s the kind of Steam game you purchase when it’s on offer, and that’s what I did when it was on offer for £5 on the 22nd of February.
So here’s hoping that it’ll go down in price so that it might encourage more people to purchase and play it, because it’s a great little online multiplayer game!

UPDATE: I didn’t realise this until I had a better look on the Steam store page, but you can get this game to run on Mac and Linux too! Good to include multi-format gaming!