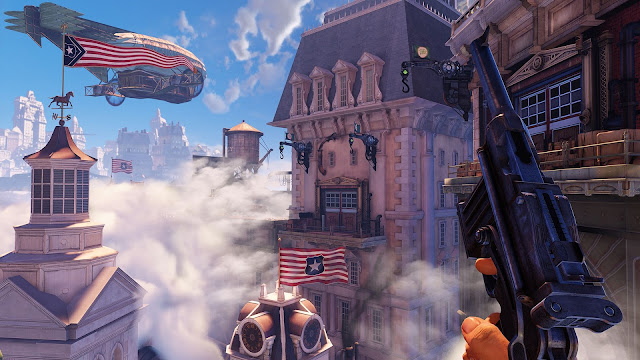 Bioshock now has it’s third game, Bioshock Infinite, a game set before the events that took place in Rapture in the first Bioshock game in the 1910s. Set in a city in the sky, named Columbia, is spreading their message about America’s brilliance to the rest of the world and how the rest of the world is terrible and how they’re better than everyone else.
You play the role of a character called Booker Dewitt, a man in his late thirties/early fourties who is on a mission to rescue a teenage girl from Columbia, and bring her back to New York. But in the plot of games, movies or even books, it’s never that easy and Booker is caught up in a mess where he is treated as an Anti-Christ around a bunch of white loving, right winging religious types who are after his head.
You begin your quest on a little rowing boat with a couple taking you to what looks like a light house. But it turns out that it’s a way to get up to the city Columbia in the sky by launching a pod into the sky and crashing it into a baptist church. Similar to how you went down into Rapture in the first Bioshock game in a bathysphere. 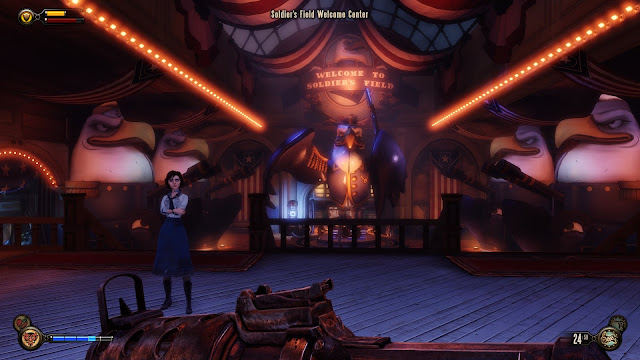 The ultimate question to ask about this game is how does it compare to the likes of the previous Bioshock titles. Well, if I compare this with Bioshock 1, or even System Shock 2, there are some big differences, and some of which aren’t for the better either. One of these is the games bigger emphasis on combat rather than puzzle and role playing mechanics seen in previous titles. One of the major things you’ll notice is how there are no hacking or unlocking in this game, instead you just collect lock picks and your partner in crime, Elizabeth, the girl who you’re trying to rescue, does the work for you. Which to a degree removes the puzzle solving and level upping hacking skills like you did in System Shock 2. However Elizabeth isn’t all about making the game a bit too easy, she can be handy. In a gun fight, she can scope the scene and try to find med kits and ammo, and when you need it, she can throw them to you. Though this does sometimes happen outside a fight where she’ll throw you a coin what feels like once every five minutes, and that dear sirs can get annoying; though it was hilarious to see her lob a coin from so far away with such extreme throwing precision. Someone should make this girl a baseball or cricket pitcher!
The new Psy/Plasmid powers in this game, called “Vigors”, aren’t terribly impressive. To be honest you can actually beat the game using just two of the eight vigors made available to you. Plus the final vigor that you collect is a real disappointment as it just pushing enemies away. At least the Bucking Bronco vigor launches your enemies in the air, why do I need to “Push them away”. After beating the game, I found out through websites that you can mix and combine these vigors, which is never actually explained in the game, and if it was I missed it! But I honestly felt like the vigors were there for “flashy effects” rather than deep gameplay and puzzle solving mechanics.
As the puzzle solving is practically gone, the game really does concentrate on combat. In each skirmish, there are a lot of enemies coming after you. Which you can take as either a good or a bad thing. Good in the sense that this is the first time that a “Shock” game has thrown a lot of enemies towards you as you’re now in a more open environment. Though on the bad side the combat does feel a little crazy as I felt that some enemies would take a thousand bullets before dying, turning this Bioshock into a Killing Floor game rather than an actual “Shock” game. Sure there’s a lot more bad guys, but why am I wasting so much ammo on these guys anyway?
Something that I had noticed was missing the feel of suspense entering a new room. Maybe if you forgot playing Bioshock 1, or never played it before. Bioshock had it’s classic enemy, the Big Daddy, a big hulking man in an aqueduct suit wielding a massive drill. Taking them out was a pain, but a necessary pain, as you needed to kill them so that you can take it’s little sister in order to progress in the game. But they would appear randomly in the game meaning that they were never in the same place in each play through, meaning that you could walk into a room and “BOOM!” a Big Daddy in the room sees you and charges at you with drill in hand to turn you into cannibal curry! It’s just that in Bioshock Infinite that’s not there, now there is the over powered enemy, in fact there’s two, the Handy Man, and the Patriot, but if you re-play the game, they’re always in the same place, therefore removing any fear you have with these enemies, which I have to say is a bit of a shame.
“So is there anything gameplay wise that you like about the game Ian!?”, oh yes there is dear sir! Going back to Elizabeth, she has the ability to open these inter-dimensional “Tears” where an object from a parallel universe can be brought into the game. Some places might have a few of these “Tears” that Elizabeth can open up and give you an advantage in battle, depending on what’s available, you can bring in extra cover in the battle field, turrets, rocket launchers, turrets that are mounted on balloons called Mosquitoes, extra med kits, boxes of ammo, or even random people from a parallel world that can be used as distractions to the enemy. Sometimes these extra objects can be the difference between winning and losing a gunfight, which makes opening these tears with Elizabeth worth it. 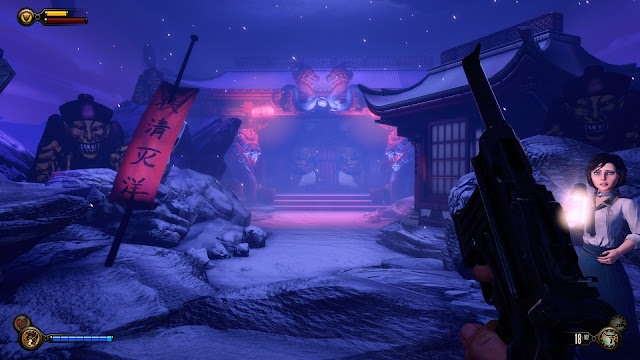 As for graphics, this is something I am pleased with. Not that I ever disliked the graphics of previous “Shock” games, but it’s great to see that Irrational Games are pushing the way in graphics. Be it textures, lighting, water modelling, it’s all gorgeous. Bare in mind that I was playing this on the PC, which I can easily say without looking at the console versions is the best version for graphics, I mean come on, the XBox 360 is seven years old, and the PS3 is six years old, and they can’t be upgraded, so that assumption has to be reasonable. Though I will suggest that if you’re like me, and many others, with an nVidia graphics card, be sure to download the latest driver update to reduce the crazy amount of screen tear. But once fixed it looks absolutely stunning on my PC monitor. What’s more impressive are the facial expressions on Elizabeth’s face, they look really good without going into the “uncanny valley” of terrible looking facel models. Though to be honest some of the NPCs could’ve had better work on them.
Now, for the Coup-de-grass of the game. It’s plot, story and ending. I’ll try to write this without spoiling it, because it’s so worth playing this game for it’s ending! As you progress in the game, you slowly start understanding the story behind Elizabeth, her Farther, Comstock, her mother and the little conspiracies and battles in the city of Columbia. Not only that, but you learn about a group of people called the Vox Populi who wish to defeat Comstock and turn Columbia into a borderline Socialist community. But you discover something very big at the end of the game with an awesome plot twist that’s so worth beating this game for. For some it might be a little unoriginal, but for me I didn’t see it coming. Plus you learn a bit more about these reoccurring twins that appear and disappear in thin air and about their dark devious experiments. In a similar plot to the other “shock” games, you discover that you’re not quite the good guy, but the reason for why you’re not the good guy is very different, but still mind blowing as you watch the final cutscene play and have your mind set in every direction and around corners!
So, do I recommend Bioshock Infinite? Yes! BioShock Infinite, even with it’s slightly disappointing gameplay mechanics, rather boring vigors and bigger emphasis on combat; it’s still worth playing the game for it’s beautiful graphics and awesome story. The game is simply a great experience that any gamer should witness and not spoil. It’s not a perfect game by any stretch of the imagination, but it’s still a game that people should have in their collection and keep. It’s a keeper! So grab yourself a copy!

Okie doke, I’m getting REALLY rusty on this blogging stuff! Thinking I can do this on a daily basis and only write stuff out on a weekly basis, LMAO! So here’s a round up…

So yeah, PAX East happened, and there wasn’t a lot happening until a lot of us got a huge nostalgia boner for this!
“Life is like a hurricane, here in, Duckburg…”
I mean seriously, when do you get hype like this for a downloadable only game when it succeeds upcoming Triple A titles! What made this even better was hearing Peter Monlineux whine his little narcissistic face about how this game is getting more press than whatever the hell he’s doing…
Now I originally played this on the GameBoy, but when I got my NES version later on I was surprised with how close the two games are. The GameBoy version has it’s levels shorten down, but the sprites, animation and music are almost dead on to the NES game. But yes, out of the many Disney games that deserve a remake it’s DuckTails. I could say the MegaDrive version of Aladin too, but I highly doubt that’s going to happen any day soon…
Looking at the videos and the livestreams they had at PAX East, it looks like a very good and faithful remake of the NES game. However they’ve made the bosses tougher as they were a little on the easy side on the original NES game.

Yup, the Games Industry is slowly admitting that DRM is messing up the customer base for games. You don’t say? lol!

It’s a shame that it was SimCity(2013) that has caused this. I do like the game, and I haven’t had too many issues with the servers, though it would be nice to easily find a damn multiplayer game that isn’t totally filled, or start a multiplayer game where people join it :/ Still, it’s good to hear from the games industry that they’re admitting that DRM might not be a good idea…

Oh yes, the lovely Focus from the podcast that I co-host, Stalking the Retro, gave me a preorder for this game for Christmas. Well it came out, and it’s pretty damn good. It’s not perfect mind you, I’ll write up a review as soon as I beat the game, and I’ll tell you what’s not so hot about the game. But regardless of “some negativity”, it’s a pretty damn fun game, possibly the best so called “Triple A Title” I’ve played in for a while.
In the mean while, enjoy some pictures I took in-game… 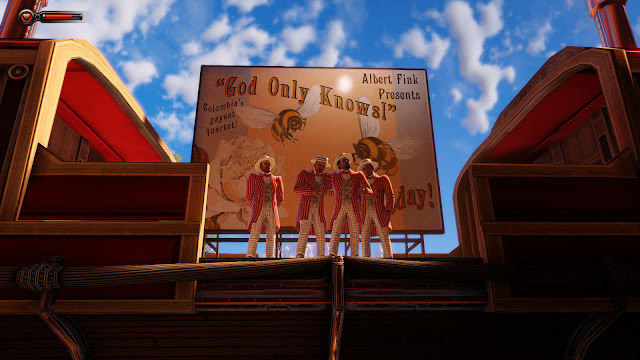 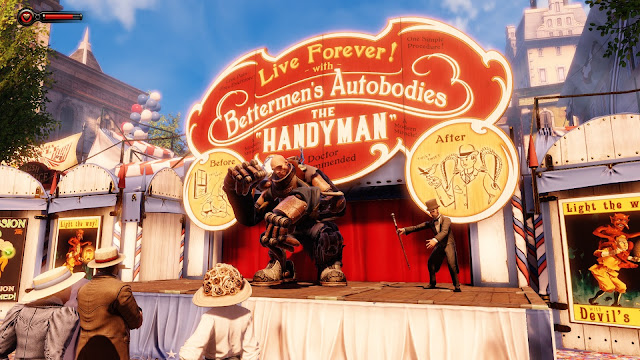 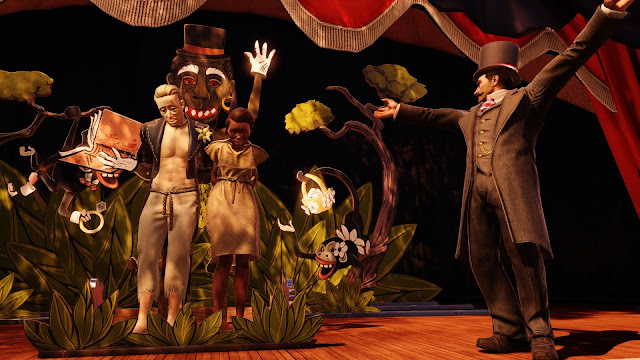 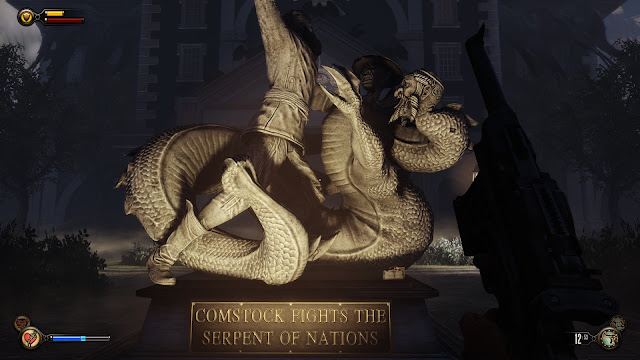 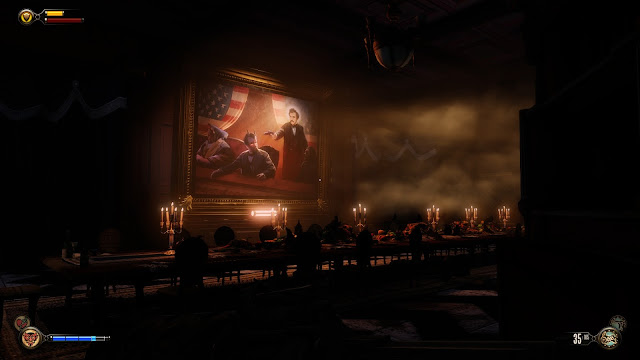 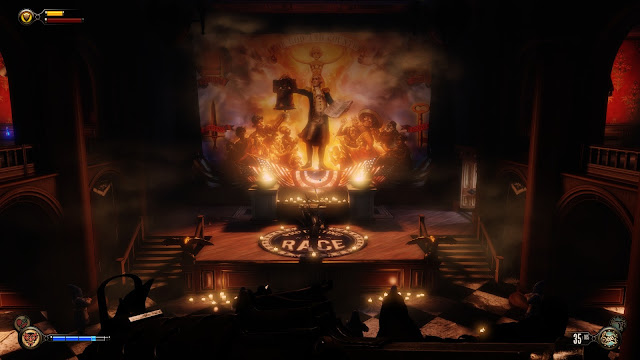 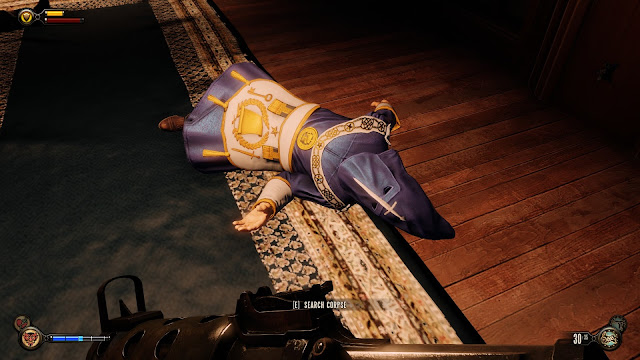 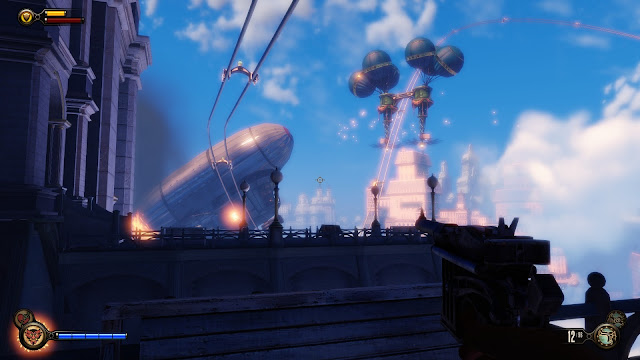 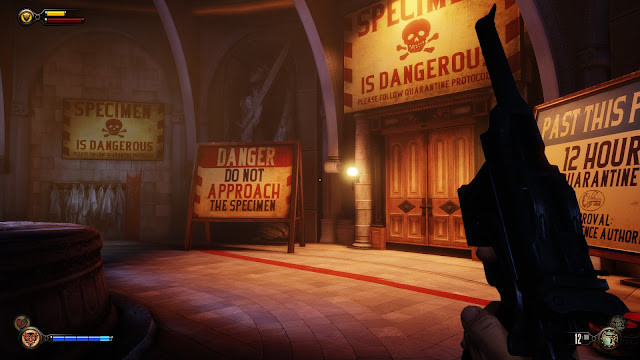 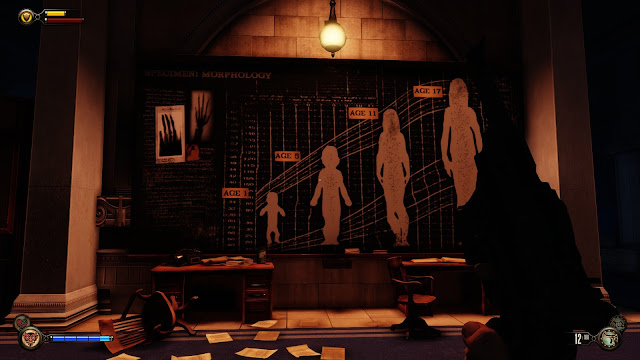 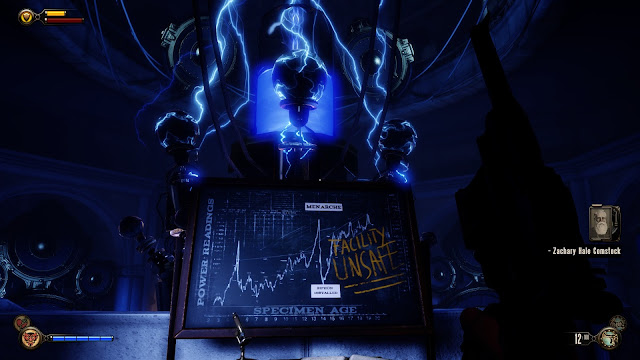 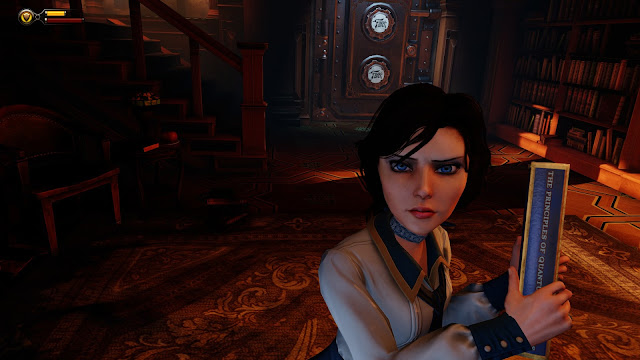 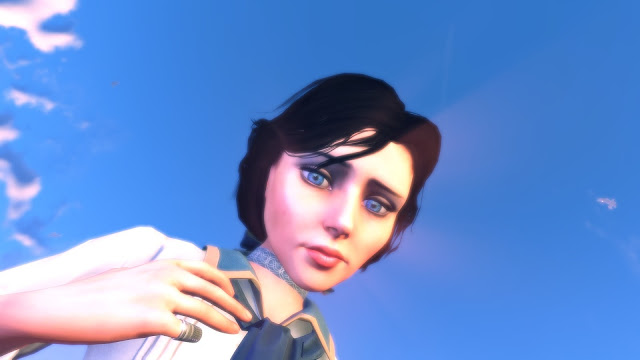 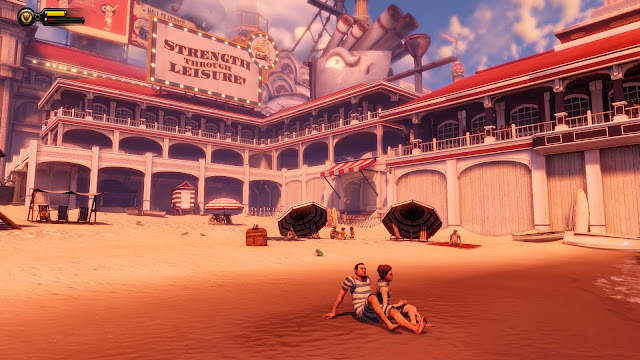 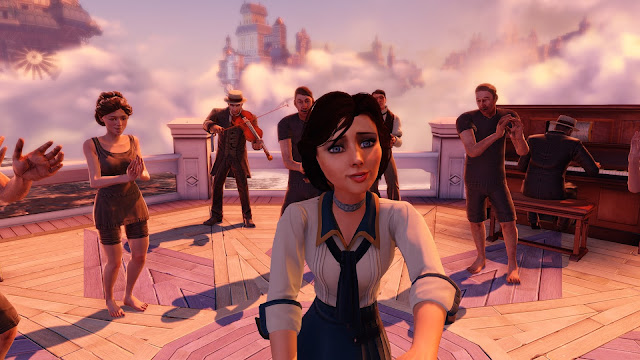 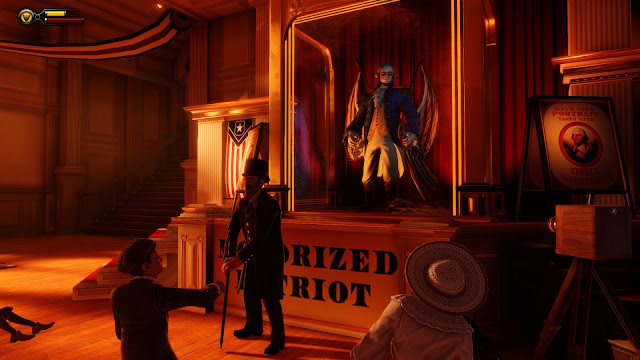 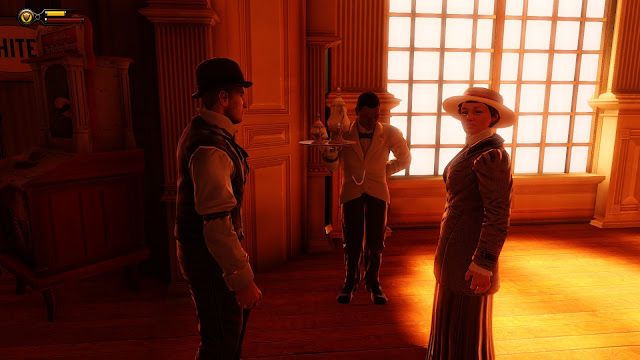 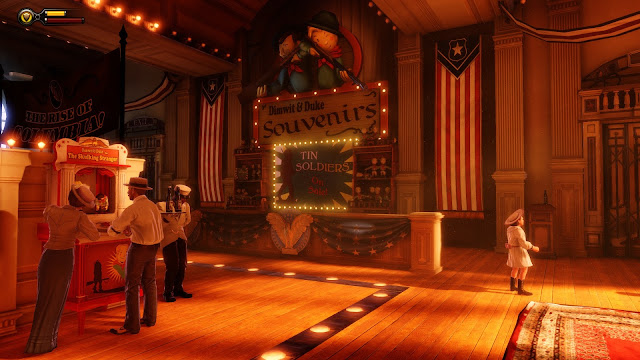 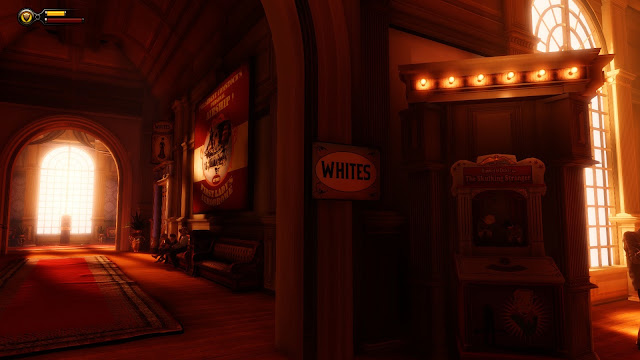 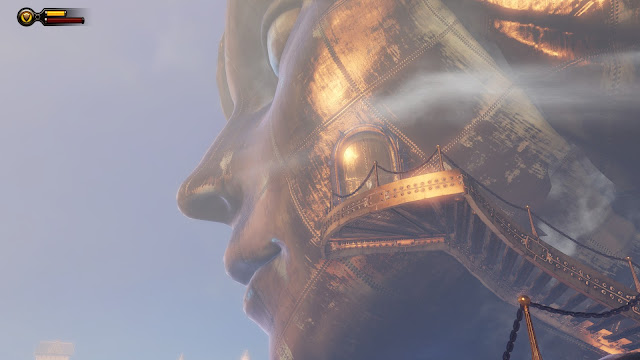 So yes, lot’s of racism is the game! Kinda creepy to be honest, but this is a portrayal of America in the late 19th century to early 20th century. So racism and right wing religion ensues…